I released this video two weeks ago for Cool Cavemen. As I try to release one video every week, I give a high priority to the editing work. This leaves me with little time to write on this blog.

But starting from now, I plan to publish a blog post for each video. I’ll use these articles to write about one aspect of the work involved behind the scene.

In the first post of the series , I gave you the context in which the concert was performed. Today the post is dedicated to video formats. First, let’s talk about the video sources…

The concert was shot with 4 cameras. Among them, only two were of the same kinds. Those were part of the live broadcasting system of the event. This explain the “ mise en abyme ” effect in the background screen: 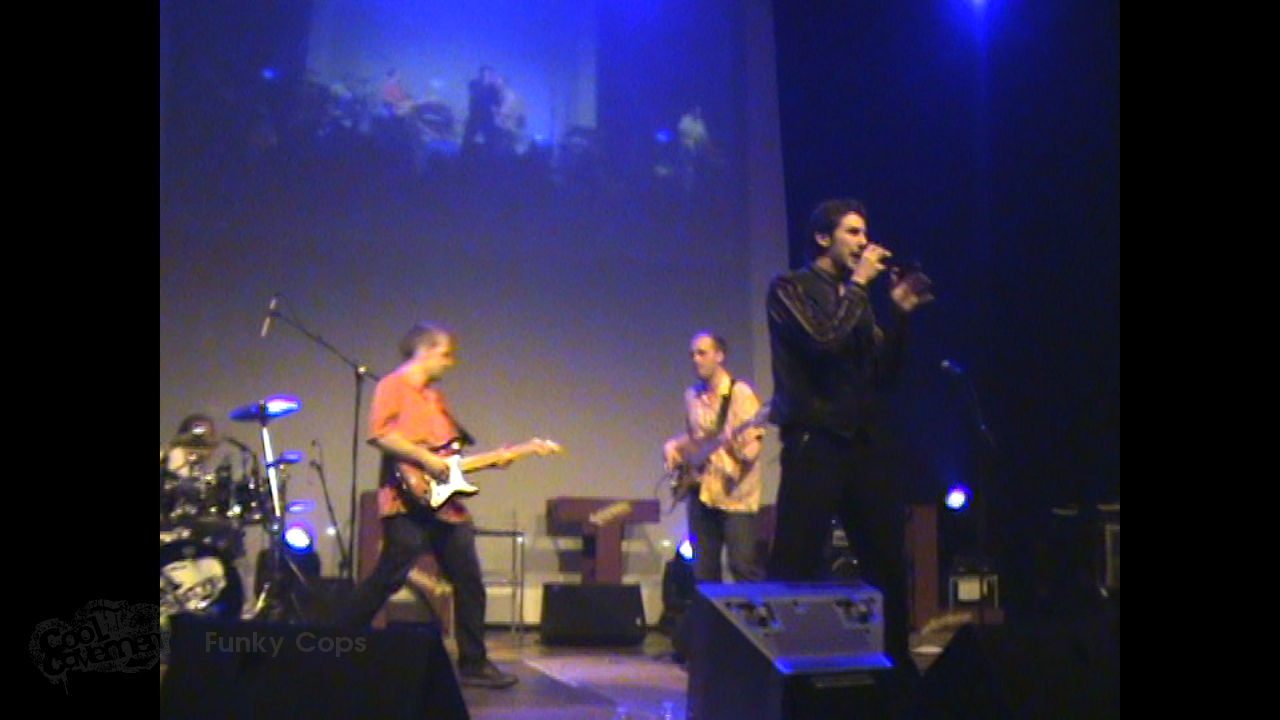 At the end of the gig, I wasn’t be able to retrieve two continuous feeds. Instead I got an already-edited video corresponding to what was projected live ( sigh ).

As a result, I ended with 3 video sources:

All those informations were extracted thanks to ffmeg , mplayer and tcprobe (see all the command lines involved ).

As you can see, this is an absolute mess! There is no consistency! And now, before starting the video editing itself, I have this important decision to make: choose the final video format, in which my project will be rendered.

Let me explain how I did it. But before, I have to tell you something. To me, an interlaced video at 25 fps is just a 50 fps stream with half the vertical resolution. This is important for you to know if you want to understand how I perceive quality. I’ll probably explain it in details in a future article. But for now, this should give you enough insights on how I came up with my two strategies.

The first one is the “maximizing” strategy. It consists of keeping the best parts from all video sources. Based on formats described above, this means 1280x720 pixels progressive frames at 50 fps, with 1:1 pixel ratio and 16:9 display ratio. In this process we create non-existent informations by scaling and interpolating spatial and temporal data.

The second strategy is the “minimizing” strategy which, you can guess from its name, is the exact opposite of the first one. Here we discard spatial and temporal informations until we reach a sub-format shared by all sources. In our example, this gives 352x288 pixels frames at 30 fps, with a pixel ratio of 24:22 and a display ratio of 4:3. There, 288 is half 576, which is the result of using a deinterlacing “bob” filter on video streams #1 and #3 to get 50 fps. And for the pixel ratio, as we “bobbed” the interlaced videos, we keep the worst horizontal scaling and multiply the vertical scaling by two, which give us 24:22.

For this project, I finally went by the first stategy. I choosed to render the project to a 720p video at 25 fps, with a 1:1 pixel ratio and 16:9 display ratio. Also known as… HD -Ready !

Why this format? It’s the most popular one that closely match the characteristics we established three paragraphs above. It’s also quite standard, and “gives a chance” to the second video source to display in full resolution. I also felt that it will cause less pain when confronted to the wide range of software video players out there.

Now that I have decided which format to use, I can create a project in my video editor with the right parameters and start the editing process. But this is another topic for another post!

2010
After several months of work, nit-picking and drama, I’ve finally released Cool Cavemen’s “Pump the Funk Up” video: This video was taken during the biggest Cool Cavemen’s concert in 2009. We were playing at Gayant Expo (“largest french venue in the north of Paris” as they said …

Making of Omashay’s “Wish You Looked at Me” Music Video

2011
Last month I edited the Wish You Looked at Me video clip for the Omashay project. This is a side-project of Cool Cavemen’s saxophonist. The video is finally available on YouTube: All the video material was shot by Tomasito itself, with his Canon PowerShot SX200IS point-and-shoot camera. This camera …

2010
Here is a collection of Eiffel Tower’s videos I took today with my Canon EOS 7D. These quick and dirty clips were shots this late afternoon. Please don’t look at the image quality. That’s not the point. We’re interested in bitstream, video/audio codecs and media …