Several months ago I committed some code in my GitHub repository, but I did it from a temporary system. If I registered my authentication keys correctly to commit stuff, I forgot to create a minimal ~/.gitconfig file with the right stuff in it.

The result was not good looking, as my usual name and mail address were not attached to the commit:

First, get a local copy of the remote Git repository:

What was missing in my ~/.gitconfig file were the following options:

These values can be set with Git command line with the following syntax:

The commit I want to change is the latest in history, so I’ll use the --amend directive to make my changes. Putting all things together, our final command becomes:

After this, here is how the local branches looks like in gitg : 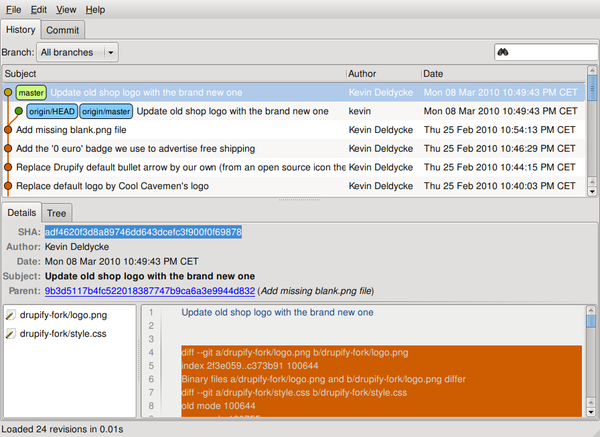 Using the git log -n1 command, we can compare the old commit:

with the new one:

Notice the fixed authorship. The commit ID was also updated as it’s just a hash depending on commit metadata.

Now we can push our changes back to the remote repository:

But this doesn’t work and throw the following error:

This is Git protection mechanism in action. Modifying already-published commits like this is a bad idea . It can break updates of other developers’ repository (if they already have pulled the commit we’re trying to change).

In our case we will force the remote repository to take our changes:

As I told you before this is bad, but nobody really cares: I’m the only person working on this repository! ;)

Finally, you can contemplate the result on GitHub, a clean and tidy commit history:

2010
Here is something I wanted to do for 3 years. I wanted to migrate my code repository from this: to a proper revision control system, like Subversion. And I wanted to reconstruct the commit history with all the proper dates. That’s something I can’t do with SVN. Then …

2010
Last week I consolidated all my code in my GitHub repository. I stumble upon an old script I haven’t publicized yet: svn2ical.py. This is a simple hack which get commit metadata out of a Subversion repository and generate an iCalendar file containing all commits of a given author …

2015
Let’s say you have two projects that were living in their own repository for ages. And all of a sudden it make sense to move a subset of code, and its whole commit history, from the first to the second. That’s a topic I already addressed. See for …