The goal of that project was to illustrate a pre-recorded soundtrack. The latter being to Cool Cavemen what The Ecstasy of Gold is to Metallica: a piece that is played before each show and serve as concert intro.

It’s an original mockup of a radio broadcast, and a tribute to Classic 21 ( ex “Radio 21” ), the (best) Belgian radio station we used to listen to as teenagers, and still do.

Footage used to produce this video is public domain material found at archive.org . If you’re curious, the detailed list of all sources is available in the credits, at the end of the video.

As for my previous project , I have to warn you that it may not look as funny as for French-speaking audience. That being said, here is the final result:

The challenge of this project was to have video of people speaking in sync with the audio. I suffered a lot trying to make it as convincing as possible. If the final result is far from perfect, I find it to be believable enough for the amount of time I invested in.

As for the tools used to produce this video, I edited it in November with a development version of Kdenlive, under an Ubuntu 11.10. As usual, here is a screenshot of my timeline for reference: 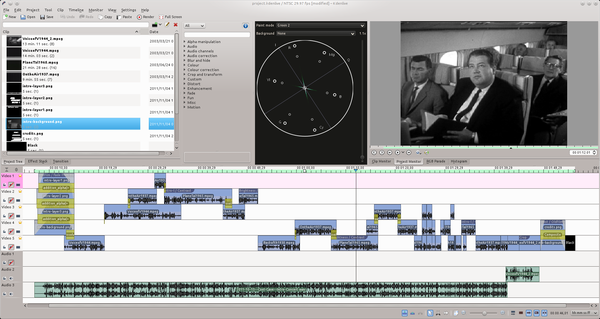 The project is using Kdenlive’s “ NTSC 29.97 fps” profile, which produce a 720x486 pixels stream with a pixel aspect ratio of 8/9 and a display aspect ratio of 4/3. I choose this profile as it was the closest to the original videos I downloaded from archive.org.

I composed the credits and title card in Gimp, and tried to mimic the style of that period. This mean approximative composition and abuse of typography: 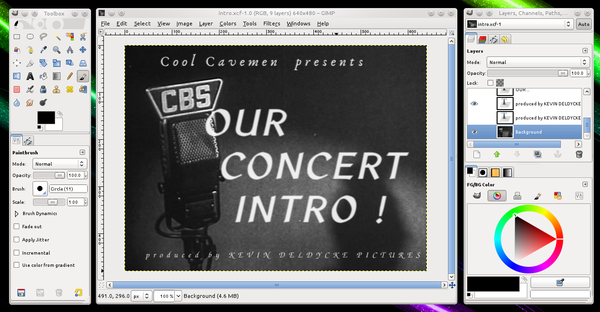 To enhance the effect, I blurred everything and separated the text blocks in several layers. I then applied to each of them some random movements to add a parallax effect, thus getting closer to the look and feel produced by the imprecise optical process used in the early days of movie making.

2012
Before going deeper in the details of making this music video for Cool Cavemen, let’s refresh our memory by watching the final version: If this video was released 4 months ago , it was shot 2 years earlier: the 3rd of January 2010. We choose that day as it …

2012
I’ve just realized I’ve never really finished the series of posts I started in 2010, a series about my longest video project: the biggest concert we performed with Cool Cavemen in 2009. Cool Cavemen is working right now on a new album, which means we’re approaching the …