Before going deeper in the details of making this music video for Cool Cavemen , let’s refresh our memory by watching the final version:

If this video was released 4 months ago , it was shot 2 years earlier: the 3 rd of January 2010. We choose that day as it was the only occasion before a long time for which all Cool Cavemen musicians were available for something other than a gig or a rehearsal.

Being a newly self-proclaimed (but inexperienced) videographer, I was actively looking for shooting something, anything. A quick and dirty music video will provide a great excuse to test my newly purchased Canon EOS 7D . So we arranged to meet at the SoundUp Studio to shoot a video for Burlesque Burglary .

During this period, I was working on a 1-hour video of Cool Cavemen’s 2009 biggest concert . The editing process of the latter was quite frustrating as I only had 3½ cameras . Not enough to decently cover a live performance.

To not make that same mistake twice, my goal was to plan the shooting in a way that will give me enough freedom at the editing step. I had no time to prepare something elaborate, and with only one camera, I proposed to record in playback and multiple sequential takes.

Shooting everything in playback was an obvious decision, to ease synchronization. Later during the recording session, I noticed it had a nice effect on musicians, as it reduce their cognitive load: they don’t have to focus on producing accurate music with their instruments, which makes them more physically active! :)

I then decided to emulate a multiple camera setup by shooting each musician separately for the duration of the entire song. I didn’t let one guy alone on his dedicated take, and placed another one in the background to keep the “band mentality”.

You can see all the synchronized takes I described above at once in the following video:

After all theses shots, the band was warmed up and comfortable enough to start suggesting ideas. So we started to shot some specific sequences to illustrate some very specific parts of the song.

I shot everything with a Canon EF -S 15-85 mm f/3,5-5,6 IS USM lens. This lens is quite sharp for a non-L series, but the final video doesn’t do justice to it: several shots could have been better, but I had limited knowledge of photography at that time, and had no good focus technique.

But that lens has a really good optical stabilizer, which was a huge relief as I hadn’t bought a tripod yet. In fact all shots of the video were hand-held. For some in which I needed better steadiness, I used a Gorillapod to give me extra contact-point. This is far from being a comfortable but it did the job, at the price of back-pain at the end of the day.

I also used my only other lens, the Canon EF 50mm f/1.8 II , to film some instrument’s close-ups. But only one or two of these takes made it to the final version of the video.

To keep color temperature consistent, I made a custom white-balance using a white card . Here is Vince holding it for me: 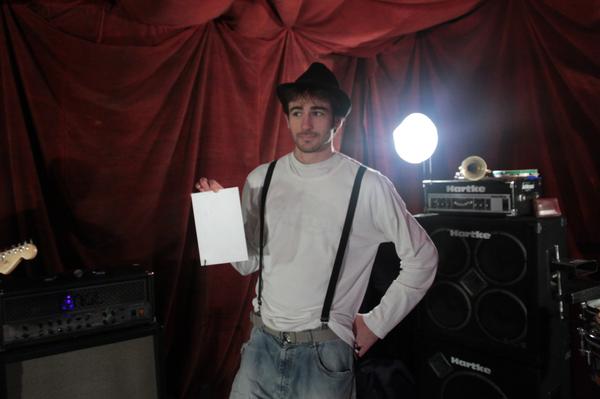 To light the room, I placed behind the camera 4 x 250 W tungsten lamps , each pair lodged in a StarWay Clap-500 fixture: 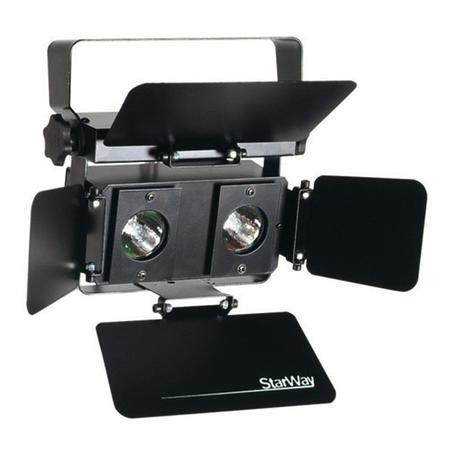 These are in fact generic blinders (mounted on a standard microphone stand ) I use in Cool Cavemen’s concerts: 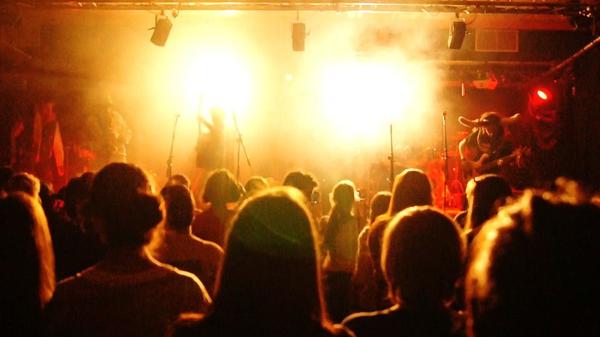 I augmented this setup by reusing two household halogen lamps from the studio, and placed them on the right and left sides.

I gelled all the lights with a Lee 216 White Diffusion filter . The blinders had an additional layer of Lee 205 Half- CTO filter . In retrospect, these CTOs were unnecessary because, unknown to me, the lamps were already producing a color-temperature of 3200k.

Here you can see on the left one 500W blinder on a stand and one of the household halogen-lamp on the right, all with diffusion filters:

I choose to shot in 1080p with a 1/50 shutter speed. I used a frame-rate of 25fps because at that time I lacked the confidence of using a more cinematic 24fps.

During that session I produced 36.6 Go of data, which represent 1 hour and 54 minutes of footage. Having so much material was a first for me, which partially explain why the final video was released 2 years after being shot.

This huge delay is also due to extensive issues I experienced with my former MacBook Pro in 2010 (including data-loss). That year I also spent most of my free time editing a 1-hour video of Cool Cavemen’s biggest 2009 concert .

2011 was no better as I spend time upgrading my server to the latest Debian , and migrating Cool Cavemen’s legacy website from e107 to WordPress .

It’s only at the end of 2011, that I managed to find time to finally complete the project. Here is my final timeline in Kdenlive: 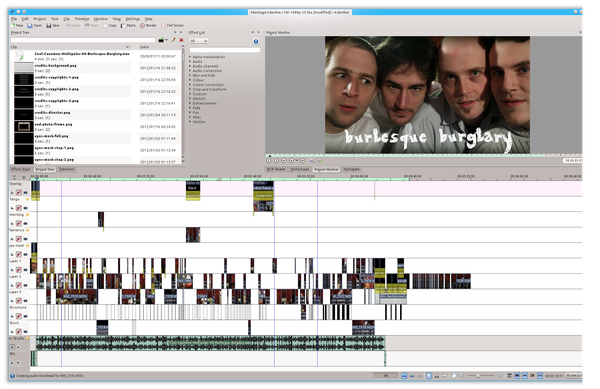 The chaotic “Burlesque Burglary” title at the start of the video is composed of several steps:

All of these were hand-drawn by Cécile, then recomposed later in Gimp:

Finally, I exported the video with different combination of lossless video and audio codecs, but some were not digested by YouTube :

2012
I’ve just realized I’ve never really finished the series of posts I started in 2010, a series about my longest video project: the biggest concert we performed with Cool Cavemen in 2009. Cool Cavemen is working right now on a new album, which means we’re approaching the …

On tour with Cool Cavemen!

2009
This week I’m on tour with Cool Cavemen. I’ll try to cover this event on twitter. You can follow our adventures live through my account. And if you’re on twitter, don’t miss the official feed of the band! :)