I live with a scientific data-hoarder. Last month I discovered a stash of old HDDs ranging from 320 GB to 3 TB spanning a period of 15 years. I was horrified by the high probability of loosing all that data to mechanical failure, bit-rot or shear bad luck.

I can’t help it and instantly felt the urge of proper backups and data management. The first step would be the creation of a NAS at home. Best excuse to bootstrap a home-lab right?

I disqualified integrated NAS embedding their own OS and proprietary apps to avoid vendor lock-ins. I aimed for a standard and widely adopted software stack.

Silent data corruption being my main concern, I need a robust filesystems. The last time I looked years ago, BTRFS was a big upcoming contender. But it did not seemed to have caught up in popularity since then. So I picked ZFS , for its maturity , flexibility and native data integrity capabilities.

I need my appliance to run stable for the next few years. I can only achieve that with a healthy distribution. Choosing FreeNAS was a no-brainer : big community, open ecosystem, actively maintained, built upon proven technologies.

Especially since it was announced:

This will reduce project fragmentation and a concentration of efforts: a strong future for the platform.

Let’s evaluate my raw needs. I need a place to store:

Adding all that and rounding up, I end up with at least 8 TB of immediate storage requirement. With a 20% margin, I’ll be happy with 10 TB .

To provide resiliency, flexibility and allow for future grow, we will rely on a disk array. How should we structure it?

RAID 5 or RAID -Z1 arrays (simple parity) are no longer safe . With drives getting bigger (> 2 TB ), reconstructing an array takes too long. So long the probability of loosing an additional disk is real. Cascading failures is not an option.

RAID 10 is a bullet-proof arrangement. But too expensive for our home usage.

RAID 6 / RAID -Z2 is the best compromise by providing double parity. With 4 drives, we have a similar risk profile as RAID 10: only half the capacity is available because of redundancy, but we can loose up to two disks. The upside is that any additional drive will contribute its full capacity to the array.

Speed, space and safety of different RAID -Z types are explored in the ZFS Raidz Performance, Capacity and Integrity article.

Should we activate ZFS deduplication feature? No. It consumes too much RAM and CPU for minimal gain. Unless you’re a company looking to archive multiple years of backups for legal requirements, don’t bother with deduplication.

The first hardware to decide upon should be the drives. This is the core component of a NAS . Once we have these as a starting point, we can figure out the missing pieces.

I’m not that much interested by their performances. What I’m looking for is the peace of mind these bring data-wise, by their virtue of having no mechanical part. And the absence of noise.

SSDs are still too expensive for that use-case. Let’s revisit that option in a couple of years as prices gets lower.

That was my first choice. While pricier than their 3.5” equivalent, I was ready to pay a little premium to reduce the physical space and the noise.

Then the “ SMR scandal ” broke out. SMR drives have bad performances and artificially increase resilvering time of RAIDZ array from 17 hours to 10 days !

Note: SMR is not bad technology in itself. As long as the software architecture exploiting it is designed to leverage its asymmetry.

Worse, I already ordered a small case ( SilverStone SST - ML05B ) and all its accessories (fans and cables). This box was now useless as I need more volume to accommodate bulkier 3.5” drives. My plans were doomed anyway. If that case had four 2.5” slots, you can only cramp there two, maybe three, 15 mm thick drives.

Here are some photos of my first attempt at building a NAS with that case: 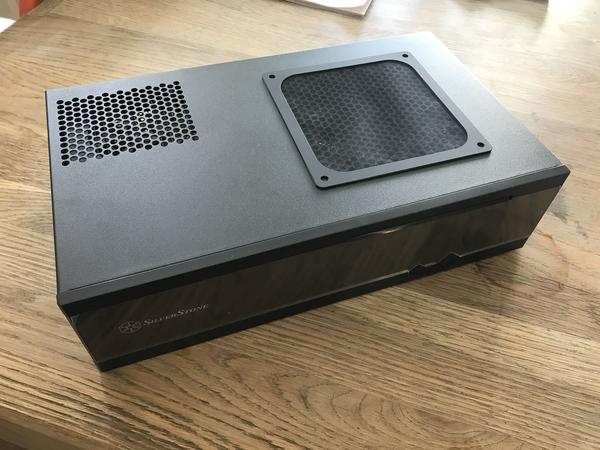 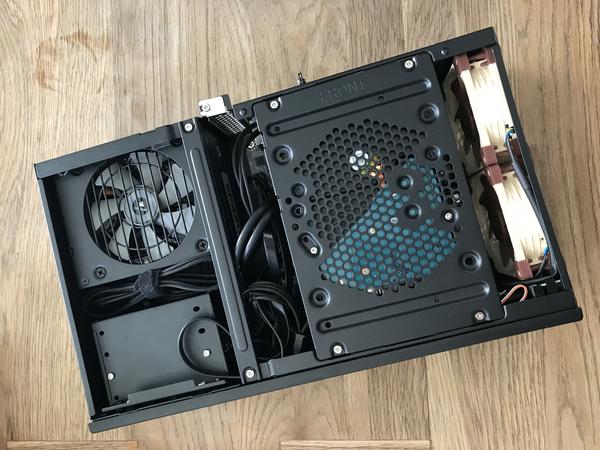 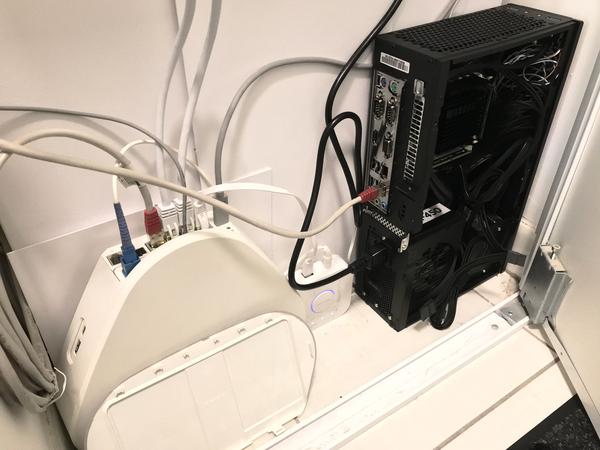 The most economical option. Here are some resources to hunt down the right disk and avoid SMRs:

The purchasing decision was also driven by availability, and the fact it was the first drive announced by its manufacturer to be non- SMR following the scandal. Which shows how timing and transparency is somewhat critical to get new customers. ;)

I went with the 6 TB models as they were at the right $/ TB sweet-spot and gave me 12 TB of useable space. Beware that these drives are loud. Only discovered too late the 6 TB model is 33 dB while the 12-16 TB variants are 20 dB (according to specs sheet).

I ordered four of them on three different marketplaces, with a couple of days in between to spread the risk of delivery mishandling. This is more superstition than science. These drives are likely to come from the same manufacturing batch given the time-window.

Went fishing for another case. I increased my budget three times and got a SilverStone SST - DS380 : 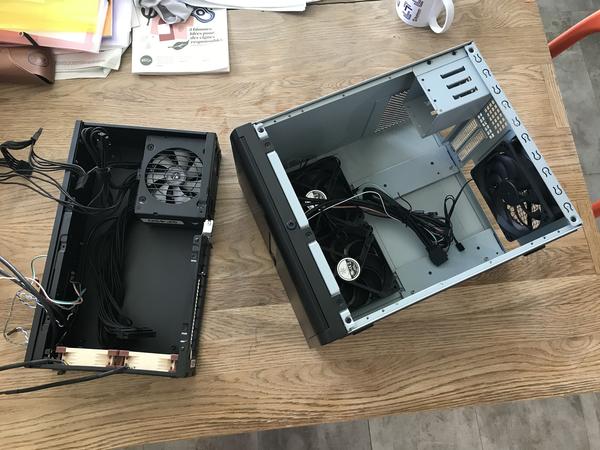 I replaced all its 3 default 120 mm fans by three Noctua NF - S12A PWM . I choose the S-series over the NF -F12 / NF -A12 as the latter targets radiators and I needed to optimize for maximal airflow for case cooling . Also the NF - S12A variant is a little quieter than the NF - S12B one. These new fans added:

I stumbled upon the Gigabyte GA -J3455- D3H which fits the bill and comes with a pretty fan-less design, thanks to its built-in Intel Celeron J3455 quad-core (up to 2.3 GHz).

Some reviews here and there called upon its capricious nature. To play it safe I carefully choose RAM that was certified by the manufacturer , and maxed it out at 16 GB .

I tested the setup for a couple of days and everything worked great.

But I overlooked one issue: Realtek ethernet NICs are shit . It’s written everywhere on discussions boards, even in FreeNAS hardware requirements ( Intel recommended they said…). And FreeNAS maintainers are fed up with support requests :

But I ignored the warnings thinking it was meant for enterprise users looking for performances.

Sure enough things went south fast the first time I tried to copy 700 GB over the network. I left the transfer unattended in the night and woke up with a NAS nowhere to be found on the LAN . The Realtek NIC just froze, bringing the whole motherboard with it.

A hard reset later, I found an infinite amount of these in the logs:

I already wasted too much time with hardware. I decided to just throw money at the problem and get a server-grade motherboard.

Meanwhile, I resorted to one of the worst hack I ever came up with. Not sure it will even have an effect. I added a cronjob-based watchdog checking connectivity and rebooting the machine if the local router can’t be found:

We’re no longer fan-less, so I searched for the most silent cooling I could ever found. I went straight to Noctua for their reliability, performance and quieteness.

I got the Noctua NH -L9i chromax.black , for LGA 1151 sockets CPUs and 4-pins PWM . Which also perfectly fit the low-profile requirement of my case (< 57 mm).

Surprisingly the black version was cheaper than the regular, brown variant .

In this section I’ve cross-referenced all CPUs supported by the motherboard with the cooler compatibility list : 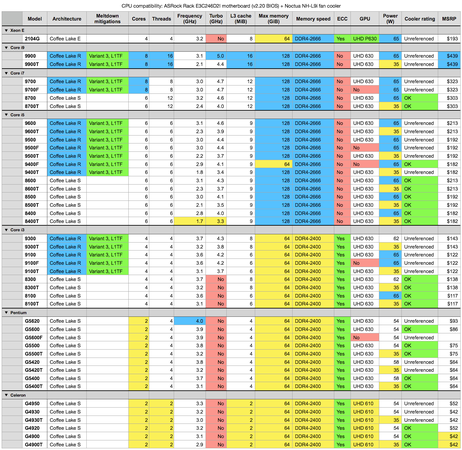 All CPUs featured the matrix above shares these specs:

But most Coffee Lake-R CPUs are missing from Noctua list (tagged as unreferenced ). I have no intention of overlocking, so we can assume they’re still safe with our cooler, based on TDP and filiation to their Coffee Lake S ancestors.

All in all, low power 35 W models (T suffix) are safe choice.

The no-suffix and F variants are great, and their TDP are perfectly in range within the cooler capabilities. If we find out 65 W to be too much, we can still artificially put hard-limits to the CPU in BIOS .

Note: there’s an elusive candidate in the name of the Core i3-9320, based on the i3-9300 , with slightly better turbo. Unfortunately it is not referenced in the motherboard compatibility list.

My final shortlist was:

I ended up with a Core i3-9300T , probably overpriced at the time of purchase, as it was harder and harder to find any of the reference above in retail (seems like Intel prioritizing higher SKUs to increase margins).

I also wasted time trying to get a second-hand Intel Celeron G4900T (Coffee Lake-S, 2 cores, 2.9GHz). It was stolen during transit . By the time I recovered it I decided upon a Core i3-9300T.

My attempt at a 2.5” disk home NAS was expensive. The TCO of the whole project is way too high if you add the frustration, fallbacks, and time spend browsing forums, gathering reviews, returning and getting refunds. All because of bad purchase decisions and poor planning.

From an economical point of view, a NAS at home is a stupid project. I should have just pushed all data to a bucket in either AWS , GCP or Azure and call it a day. So why bother? Let’s say this is a personal reminder of the incentives and economics of running a cloud business.

This time we’ll try to plan ahead future hardware purchase.

Need more space? We have a couple of options:

In my research I discovered stronger cooler, capable of handling higher base TDP . Here a list of potential upgrades:

All coolers above are:

Airflow can be converted:

Other candidates to check dimensions:

Upgrading the cooler will open-up more options for the CPUs below.

I don’t need more power yet. Unless I’ll get to run a couple of virtual machines on the NAS .

If this upgrade is targetting VM usages, I’ll skip the F-variants altogether. GPU passthrough is still highly experimental in FreeBSD’s Bhyve hypervisor . But there’s still some hope to have the UHD 630 iGPU supported in the far future, and provide accelerated video encoding and decoding to VMs.

So we’re left with the option of revisiting my CPU matrix against the new coolers above, and add all the more powerfull Xeon references supported by the motherboard.

If the motherboard support DDR4 -2666, my CPU matrix revealed the processors supporting that speed have no ECC support. It’s pointless to pursue faster RAM and sacrifice data integrity. We’ll keep at 2400 MHz, and purchase DDR4 -2666 if cheaper .

The current 16 GB are plenty, even with 8 drives in the RAIDZ array. To support VMs, 32 GB will be nice to have. Maxing it out to 64 GB is a luxury. The upgrade will depends on price.

I dedicated an article on bringing 10G at home .

The one I ended up with is good enough for the years to come. Only a dramatic change in drive interfaces can justify the upgrade. Once SSDs will makes sense, I’ll probably have to upgrade from SATA to an array of M.2, MVNe or whatever the right standard will be for these drives in the future.

Lots of ZFS features are on the way:

Migration from FreeNAS to TrueNAS

2020
The upgrade itself is quite straightforward by the way of the GUI. But things gets complicated if you’ve got an encrypted pool. Encrypted pool migration¶ Upgrading from FreeNAS to TrueNAS will render your encrypted pool unavailable. FreeNAS relies on geli‘s block-layer disk encryption and is considered legacy. TrueNAS …

2020
A collection of personal notes on the setup, configuration and maintenance of a home-office TrueNAS appliance. 🖥 Hardware¶ I dedicated a whole post on building the machine, in which you’ll get the detailed bill of material, cost breakdown and parts selection process. 📊 Reports¶ Disk Temperature¶ ⚠️ Do not activate any aggressive …

2020
Into my journey building a NAS for the home office, I went down the rabbit hole and chased better file transfer performance. The next step would be a network upgrade. And so I started exploring 10G at home. It is fancy, but doable. Internet access¶ I’m already equipped with …